As part of an outreach initiative to onboard new developers, Pi Network proudly sponsored three U.S.- based hackathons over the weekend of October 14-16 at Harvard University, Cornell University and UC Berkeley. There, enthusiastic student developers from around the country and world worked on unique projects on Pi’s platform and incorporated Pi Cryptocurrency in their apps.

As a follow up on the last hackathon blog post, today we are introducing our winning teams and their Pi app projects. The exceptional students who attended HackHarvard, BigRed//Hacks and CalHacks each had the opportunity to work with Pi’s technology and learn directly from the Pi Core Team. These student developers took advantage of Pi’s easy-to-use platform and developer tools, and demonstrated the creative prototypes that can be developed in just a weekend. These diverse projects signal the potential for many more products and use cases that can be built on Pi Network, and that can benefit from blockchain integration. It is one of Pi’s missions to widen the scope of Web3 applications and broaden the horizon of what blockchain-based services can provide for everyday people in the world.

Today, we’ll highlight winners from each of the three hackathons we visited. The teams’ innovative ideas and uses of Pi in their apps are what made them stand out; these projects were built in the span of only one weekend and are just prototypes at this stage. We are thrilled that many of these hackathon participants, including some of the teams mentioned below, have indicated their interest and intention to continue building their Pi apps. The Core Team continues to offer technical and design advice to these young builders, with the goal of supporting their development into full-fledged Pi apps.

At each hackathon, Pi Network selected one outstanding winning team and we are excited to introduce you to their projects!

At HackHarvard, the winning team focused their efforts on building a sustainability-promoting drone system. The project, Sus Drones, led by Akshay Kumar, Garv Jasuja, Vijay Bhaskar Chiluveru and Muntaser Syed, consists of a sensor-enabled drone that can accurately measure the CO2, CH4 and the albedo (sun reflectiveness) of the land underneath it to better chart environmental factors. 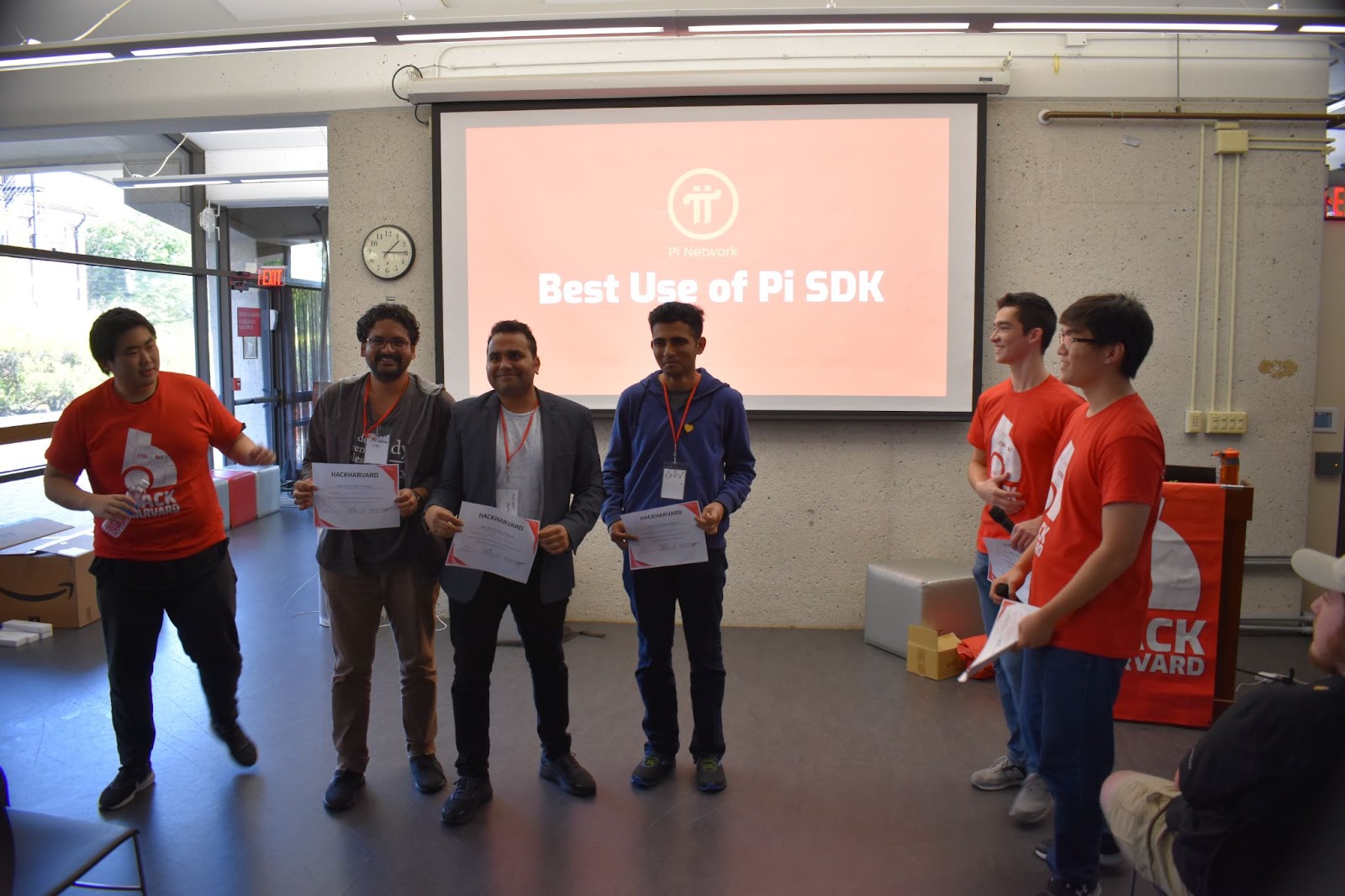 Sus Drones team members receiving their award for ‘Best Use of Pi SDK’ at Harvard University.

Why Pi Network? Vijay Bhaskar Chiluveru, said Pi is “an exciting partner because of its influential size and position in Web3.” Team member Akshay Kumar added that they wanted to take advantage of “the clear audience and users that are already there––plus the ease of use was great since we didn’t know much about blockchain.”

Pi Network is proud to make complex projects simple with our easy-to-code environment. Blockchain shouldn’t be a blocker to innovation, and we’re excited for Sus Drones’ project to continue to develop.

Another project focused on sustainability was the winning team at BigRed//Hacks, NFTree, created by Atiksh Bhardwaj, Collin Li, Owen Oertell and Žiga Kovačič. 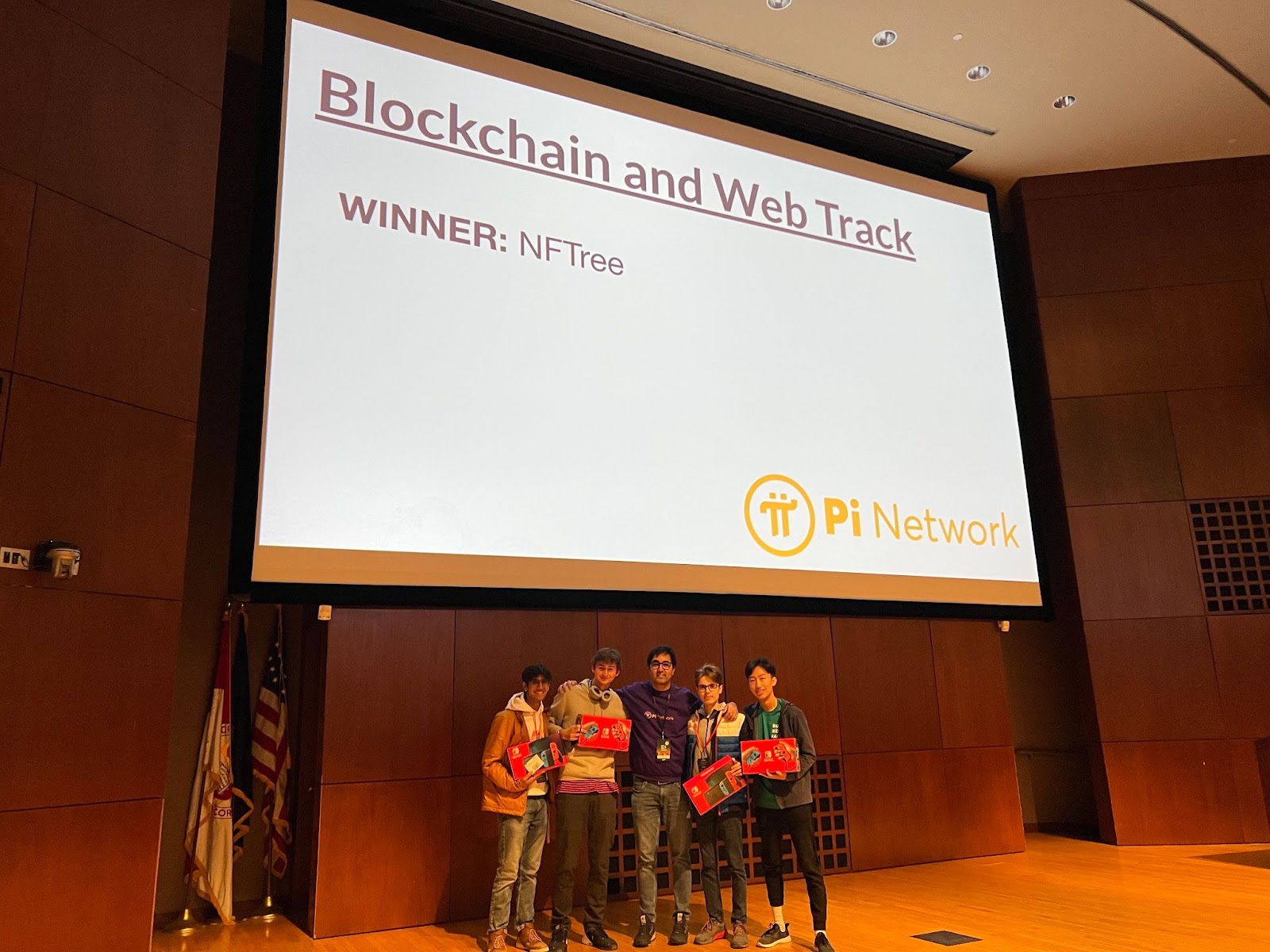 NFTree is an NTF project built on Pi Network that is designed to fund and support tree planting around the globe. NFTree’s vision is that each NFTree represents a real, unique tree, and users can buy and sell these tokens using Pi crypto. NFTree’s proprietary algorithm takes into account the tree type, location, age and environmental and climate factors to provide users an estimate of the health and value of the real tree. Pi Network and NFTree had some clear synergies; as team member Owen Oertell pointed out, “our project was focused on sustainability, and Pi’s platform is eco-friendly so we wanted to build on a platform that aligned with our goals.”

This project provides communities and individuals the ability to take real action in virtual ways, and we’re excited to see how tall this project can grow!

At CalHacks, in a competitive field of about 2,000 hackers, Sparkle stood out as an entertaining gaming app with an in-game NFT component that integrates seamlessly with Pi cryptocurrency. Sparkle team members Aidana Mustafina, Arububim Roman, Merxon Yuan and Godson Ajodo created a way to engage and entertain our user base of 35M+ active users with a simple core product which can expand over time. 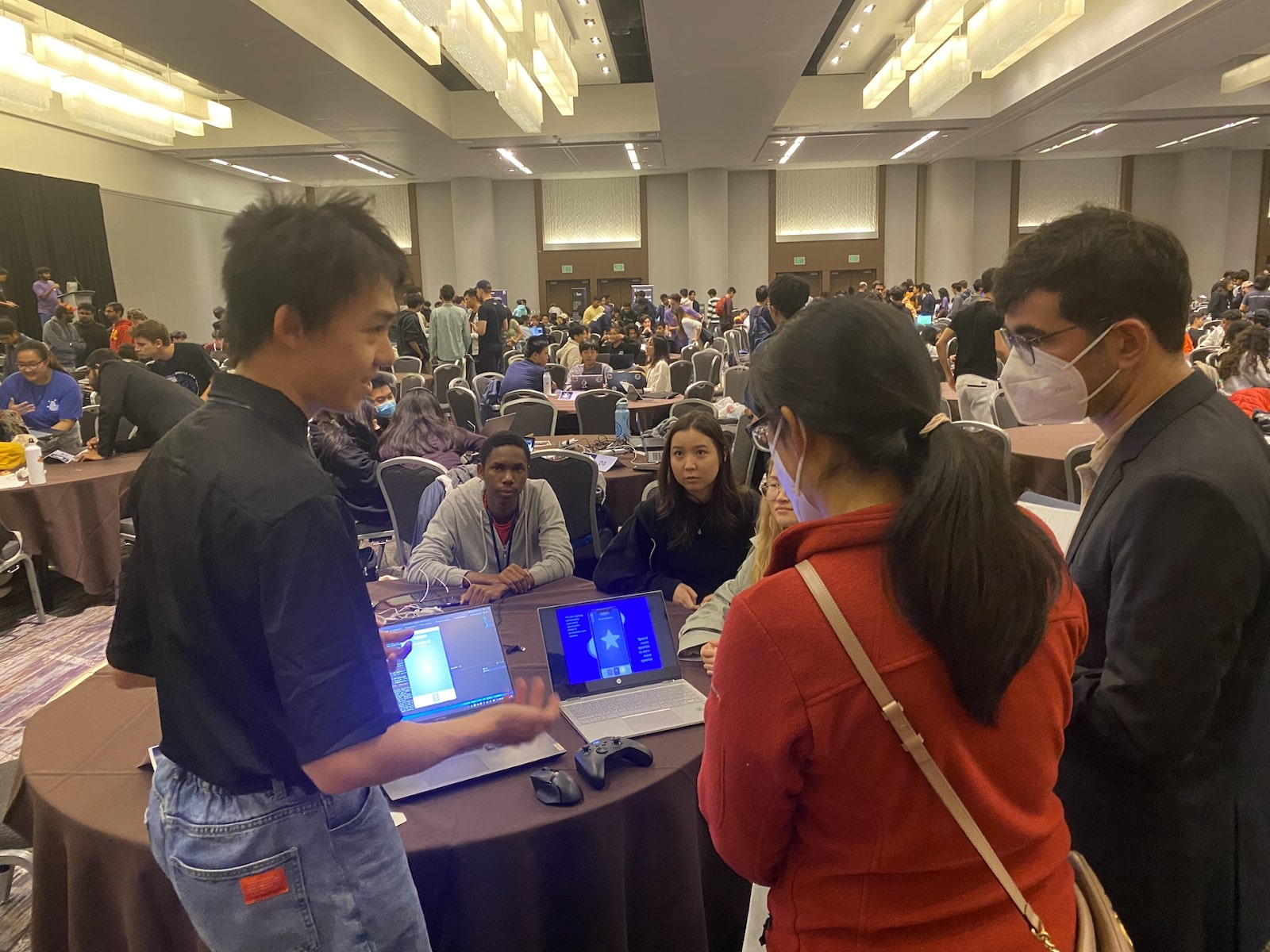 In Sparkle, users play an idle game with the goal of growing their “Sparkle”, and unlocking new levels as they reach certain achievements. Players can then use Pi coins to purchase in-game NFTs, each of which can add new bonuses or capabilities to their gameplay. And, by putting Sparkle on the Pi ecosystem, players can then later sell these game-changing NFT power ups for Pi to other players.

Godson Ajodo of Team Sparkle gave us insight into their process of developing on Pi: “At first, we thought creating NFTs and a Pi App would be too complicated. But by the end of the hackathon, we were able to put out a fully functioning prototype, and were amazed by how easily we would get that done in a day and a half!”

At Pi, we’re equally impressed and excited to see what the team does next!

U.S. Hackathons Highlight Pi Cryptocurrency’s Utility and Ease Of Use

Pi Network boasts an extremely accessible platform––not only for our members, but also for developers around the world who’d like to build on it. The developers behind Sparkle, Sus Drones and NFTree took advantage of Pi’s accessible technology; developers don’t need any prior crypto or blockchain experience- the simple steps to building a Pi App are (1) build a web app, (2) add the Pi JavaScript library, and (3) make API calls.

These hackers were able to produce the first stages of some incredible projects in the span of one weekend, offering a proven case study of success we hope other developers can draw inspiration from.

Beyond these winners, other impressive projects integrated Pi’s technologies over the course of the hackathons which deserve honorable mentions. These include Instafit (a healthcare and fitness app), Pi Bakery (a marketplace), and Craft Pi (an ed-tech app).

With so many relevant and varied projects created over the weekend, hackers highlighted both the range of use cases for the Pi community as well as apps that can benefit from developing on Pi Network.

As these hackathons have shown, building on the Pi platform is elegant and easy, and a great way to gain immediate access to an engaged user base of over 35 million members. Developers on Pi Network can make use of simple payments and user authentication integrations, low transaction fees, environmentally friendly protocol, and seamless UX to create best-in-class apps and utilities for millions of verified global community members.

The best part? With Pi’s easy and compatible platform, there’s no need for specialized languages or blockchain-specific experience to develop on Pi Network.

Pioneers, if you’d like to join the fun and build an app on Pi, become a Pi app developer at the Pi Developer Portal and program in your favorite Javascript-compatible language. If you do not know how to program yourself but are enthusiastic about contributing to the Pi ecosystem, collaborate with or introduce Pi platform to your developer friends to build utility-based Pi apps. (Note that this link can only be accessed on the Pi Browser, the home to Pi’s mobile ecosystem. See the Pi Developer github here for more details on how to develop.)

We’re excited to see what you make next! Let the stream of innovations flow.

Your comment has been sent.
Thank you for your feedback!